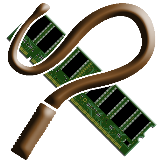 Memory out of control? Tame it with MemoryTamer!

MemoryTamer is an automatic memory-freeing app that runs in your menu bar. It supports notifications with both Growl and Notification Center (on supported versions of OS X), and also lets you free memory whenever you want with the "Free memory now" menu item.

On OS X 10.9, it gets even better! By tapping into a system function introduced in OS X 10.9, MemoryTamer is able to automatically free your memory without slowing down your computer.

Eric Henderson is an individual developer based near Indianapolis, Indiana in the US.  When not working at his full-time job programming in Java, he likes to play games (if he has any he's interested in at the time) and program, especially in Ruby.  A Mac user since 2011, he prefers to do his OS X development in RubyMotion rather than Objective-C.

MemoryTamer was a product of a dissatisfaction with existing memory freeing products that either weren't automatic or slowed down the computer.  Originally a Ruby CLI script just used personally, Eric decided to make a full Mac app out of MemoryTamer and later put it up for sale at the suggestion of a relative.  He is understandably fairly excited at the success of the first app he has ever put up for sale.

If you have any problems with the app, you can file a GitHub issue or contact Eric directly at eric@memorytamer.com.